Hit It and Quit by B.D. Lenz 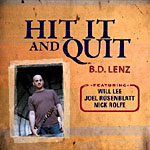 Album Title: Hit It and Quit
Label: Self Produced
Released: 2009

The title track "Hit It and Quit" is a good barometer for the album that blends a funky, melodic, and fun vibe. "Hit It and Quit" was recorded April 2008 at Cove City Sound Studios in Long Island, NY. Overall the album stands out because of this and its personnel: B.D. Lenz, 2008 Rising Star Award-winning guitarist, "The Late Show" bassist Will Lee, world-renowned drummer Joel Rosenblatt, musician/HBO actor Nick Rolfe and award-winning saxophonist Geoff Mattoon.