Heart of Gold by Alex Jønsson 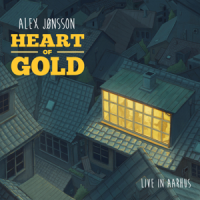 The acclaimed Danish guitarist Alex Jønsson is out with a new album, recorded with his trio at a living room concert in Aarhus, Denmark, in spring 2016. The album is Jønssons third as a bandleader and features a trio with great interplay, performing tunes from Jønssons previous records, ”The Lost Moose” and ”Spy On Your Friends” as well as new tunes. Along with Jens Mikkel Madsen on double bass and Andreas Skamby on drums, Jønsson creates an intimate musical universe, which effortlessly sneaks up on the listener. With atmospheric compositions, free floating progressions and collective improvisations, they are off on a mission – together – listening out for scratches, rhythms and reactions that can lead them on to something bigger. Jønsson was nominated as ”Best New Jazz Act” in 2013s Danish Music Awards and has since then toured intensively in Denmark as well as the Nordic and Baltic countries – making a deep impression on both audience and critics at home and abroad. ’Heart of Gold’ was released on November 25th 2016.

track of the day Heart Of Gold Self Produced Alex Jønsson