Healing by The Rita Collective 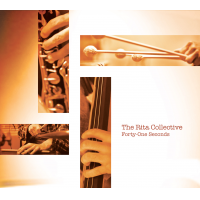 A little light joy to brighten your week.

Forty-One Seconds is the first release from the Rita Collective, a chamber group from Rochester, NY that plays original and world music with a jazz slant. The music featured on this intimate recording is a collection of new and original works, plus select arrangements written for the group’s unusual instrumentation (bass clarinet, marimba, acoustic bass, and percussion). This recording captures the improvisatory interplay and dynamic sensitivity of the group, exploring film noir, tone poems, middle-eastern melodies, and even a little funk. Healing is an original tune I wrote after missing a gig and days of practice due to a split lip. It felt so great to play again after healing that the first six notes that came out that day became the beginning of this melody.

About The Rita Collective