Got A Light by Jeremy Ledbetter 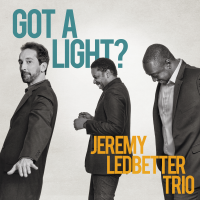 These ideas need a helmet with fortification. A solar light with inclement weather extremes.

The Jeremy Ledbetter Trio’s debut album, Got a Light?, is a controlled explosion of big musical ideas, stylistic variety, vivid colours and compelling musical storytelling. This new project features three Canadian virtuosos -- pianist and bandleader Jeremy Ledbetter, drummer Larnell Lewis of Snarky Puppy fame, and bassist Rich Brown (Steve Coleman, Dapp Theory) -- at the top of their game. Ledbetter has made a fine career so far out of travelling to remote corners of the globe from Venezuela to Myanmar in search of musical inspirations. As the leader of acclaimed Caribbean jazz ensemble CaneFire and calypso legend David Rudder’s producer and musical director, Ledbetter is used to working with large bands and more rigorous definition. So it was a welcome change of pace not to have to leave his home city to create his first jazz trio record. “Working with killers like Larnell and Rich, you don’t have to play it safe,” says Ledbetter. “They inspired me to really work without a net, and let my own compositional personality shine through. Whereas most of my music so far has been rooted in ideas inspired by traditional music, this album is about painting my own pictures and creating a cinematic kind of atmosphere. It's a contemporary jazz album that's telling stories I hope anyone would be able to understand and relate to. This record is the first truly original representation of my own musical soul, and that’s a great feeling.” Eight of the songs are Ledbetter’s original compositions, plus a cover of “GIft Shop” by The Tragically Hip as a tribute to the great Gord Downie, recorded a week after his passing. Venezuelan world-jazz diva Eliana Cuevas makes a guest appearance on "Her New Wings", and the exquisite "Suspirito" features a duet between Ledbetter's piano and Reimundo Sosa on Afro-Cuban batá drums. Don’t miss The Jeremy Ledbetter Trio at a festival or club near you. Helmets optional.

track of the day Got A Light Got a Light? Independent Jeremy Ledbetter