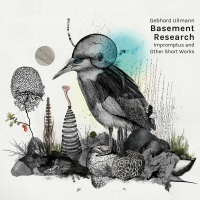 "Gospel" is the first track from Gebhard Ullmann's album "Impromptus and Other Short Works," featuring his band Basement Research on their 25th anniversary. It's available via WhyPlayJazz. On the band's eight album Ullmann – global citizen and winner of the City of Berlin’s 2017 Jazz Prize – celebrates his improvisations through a focused aesthetic in which each of the short pieces begins at a particular point and evolves into a collective band sound. Great music that consistently delves into the heart of the matter and, without skipping a beat, moves on to the next creative moment.