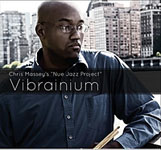 Musically, Massey's influences reside firmly in the advanced hardbop of the Blue Note Sixties, another common ground with Wayne Shorter. His Nue Jazz Project", a quintet comprising the horns of Donald Malloy and Benjamin Drazen and a rhythm section completed by pianist Evgeny Lebedev and bassist David Ostrem. The cerebral connotation in the title and another commonality with Shorter comes through in Massey's clever compositions and arrangements. Borrowing its title from the world-eating celestial villain of the same name, "Galactus" joins the title piece in directly referencing elements from comics.

track of the day Galactus Vibrainium Self Produced Chris Massey