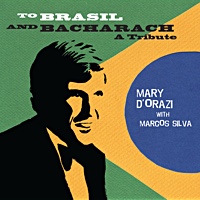 Album Title: To Brasil and Bacharach: A Tribute
Label: Self Produced
Released: 0

For the young at heart, a hopeful Portuguese lullaby.

A beautiful song by the brilliant Brazilian composer Antonio Carlos Jobim, sung here in Portuguese and English. This is off Mary' D'Orazi's CD To Brasil and Bacharach: A Tribute, released February 2, 2016. Demonstrating her love for skillfully crafted songs with evocative melodies, rich harmonies, intricate rhythms and linguistic metaphor, vocalist Mary D’Orazi teamed up with Brazilian pianist/composer/arranger Marcos Silva to produce the CD that includes several favorite Burt Bacharach/Hal David songs, plus others by Toninho Horta, Ivan Lins and more.

track of the day Fotografia To Brasil and Bacharach: A Tribute Self Produced Mary D'Orazi