For You by Tatiana LadyMay Mayfield 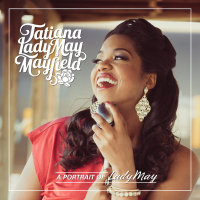 Album Title: A Portrait Of LadyMay
Label: Self Produced
Released: 2012

A fresh open voice, supa sweet soulful. Fort Worth has a special magic for creating musical pedigree and Tatiana's vocal dynamism keeps you on your toes. If you imagine Lauren Hill or Amy Winehouse singing jazz or Ella Fitzgerald singing neo-soul you will love this, and there's some classy brass too.