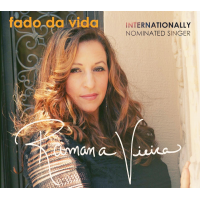 Sunday pathos, by a fado artist other than Mariza.

"Cabo Verde" is the first track from fado-influenced singer Ramana Vieira's new CD. On Fado da Vida, Vieira continues to infuse the centuries-old style of Fado – the most widely recognized music of Portugal – with a uniquely modern sensibility. Recognized by the New York Times as an American at the forefront of a Fado resurgence that is seeing Portuguese singers such as Ana Moura and Mariza selling out concert halls in the US, Vieira expands Fado's basic configuration of 12 string guitar and vocals into performances that include cello, violin, bass, accordion and drums. “Nobody else is doing what we are doing with Fado,” says Vieira.