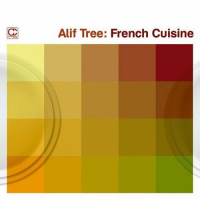 Certainly, from the very beginning of French Cuisine, when "Deadly Species" introduces the juxtaposition of deep and crisp analog jazz samples and a more abbreviated drum machine sound, the listener is very conscious of the fact that Alif Tree has placed every element with exacting specification... French Cuisine would have sounded good ten years ago, and will sound good ten years in the future. ~ Tim O'Neil, PopMatters