Elasticity of Time and Space by Nick Maclean Quartet 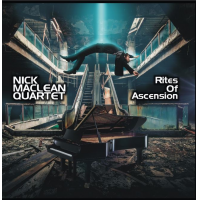 Nick Maclean Quartet’s debut full-length album Rites of Ascension pays tribute to Herbie Hancock while clearly establishing a sound of their own. This contemplative and often thrilling quartet's explorations of modern, original repertoire is led by a fast-rising star in Toronto's jazz piano community -- 26 year old Nick Maclean. Formed in 2016, Maclean's foursome delivers jazz between the two poles of thoughtful introspection and powerhouse conveyance, taking influences from Herbie Hancock's primordial 1960's Blue Note era recordings featuring Freddie Hubbard, while simultaneously paying apt tribute to some of the greatest improvisers in jazz history. The quartet's debut 11-track full-length album "Rites Of Ascension" features 6 Maclean-penned originals, 1 composition by Brownman and 4 re-imagined Herbie Hancock classics. The group is frequently lauded for the strength of their collective improvisatory vision and highlights Maclean’s ruminative piano prowess and hand- picked sidemen. Brooklyn / Toronto based Brownman Ali, one of Canada's most provocative improvising trumpet-playing iconoclasts, stands shoulder to shoulder with Maclean himself & two of Toronto's top-tier rhythm section 20- somethings: Jesse Dietschi on bass and Tyler Goertzen on drums. This recording exemplifies the 4 of them in full flight. Rites of Ascension was produced by Brownman Ali & released on his label Browntasauras Records. The label is now widely regarded as a vanguard for new and visionary talent in the evolution of Jazz in Canada. It will be officially released internationally on Friday, December 1st.

1. Cantaloupe Island 2. Driftin' 3. One Finger Snap 4. Temptation of the Crossroads: Blue VS Brown 5. Goldberg Machine 6. Nation's Unrest: A Tribal Conflict 7. Feral Serenity 8. Elasticity of Time and Space 9. Madness of Nero 10. One 11. Tell Me A Bedtime Story