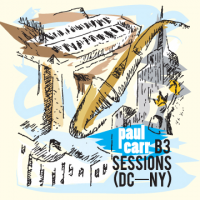 Time for some B3 love with saxophonist Paul Carr. Timeless funk.

MUSICIANS: Paul Carr, Sax; NY Session: Pat Bianchi, Organ; Paul Bollenback, Guitar; Lewis Nash, Drums DC Session: Bobby Floyd, Organ; Bobby Broom, Guitar; Byron Landham, Drums; Sam “Seguito” Turner, Percussions “B3 Sessions” is Paul Carr’s sixth recording as a leader. Paul was inspired to do this project after reflecting on the first time he had heard organ jazz. It was in 1972 and the album was Wild Hors­es and Rock Steady by Johnny Hammond featuring his first sax hero, Grover Washington Jr. and the tune was “It’s Impossible”. It’s Impossible was a pop tune of that time and the arrangement was up tempo with a disco like beat. Paul remembers listening to that tune over and over again. Years later, while in college, taking a jazz history class, he learned of the role the organ had played in the traditional jazz genre and became intrigued. He raided his mom’s record collection which included records by Jimmy Smith, Jack McDuff, Lou Donaldson and Eddie Harris. Paul has been hooked on organ jazz ever since and knew that at some point he wanted to explore it in his music. For this project, Paul sought musicians who knew the history of organ jazz music intimately. He recorded this CD in two sessions, one in Washington, DC, and one in New York City with some of the finest musicians on the jazz scene today.