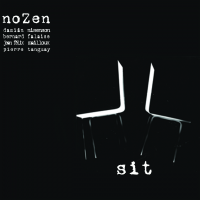 noZen is a bit of a misnomer, more like onZen, the music of meditative reflections. Calming, centred and beautiful.

SIT is the second album of my quartet, noZen. The other members are Bernard Falaise, guitar, Jean Felix Mailloux, double-bass and Pierre Tanguay, drums. We are based in Montreal, playing together since 2009, when we recorded our first album: noZen live au Upstairs. Both albums have great reviews. We play my compositions: melodies inspired by hassidic and cantorial music, music that was very present in my early childhood. However secular I became with time, this profound and deeply emotional music has always kept a privileged place in my heart, and in my creation.