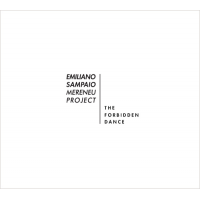 'Die Posaune' is the trombone or an organ reed stop resembling a trombone in tone. All focus on the trombone here, enigmatic, dreamy and keening sweetness.