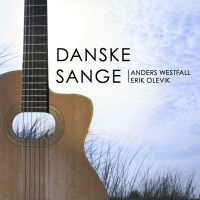 Starts off almost courtly. A distinguished and cheerful guitar and bass duet.

A new version af an old Danish folksong. Ever since I can remember, I have always been fascinated by the art of improvising. I was quickly drawn into the jazz universe and have had this focus throughout my musical activities. After years of cultivating American jazz music especially, I find more and more how good old Danish folk songs and hymns, almost lie in my blood. I, like many others, grew up with these songs and have sung and played them for holidays at any time of year - all my life. Danish songs belong to all of us, and everyone has the opportunity and right to play them the way they want, and I decided that I would combine my love of improvisation with the Danish songbook. Erik Olevik and I have tried to handle this mix of seasonal songs, folk songs and hymns asif we were playing jazz standards. All songs are selected for the strength and beauty of the melody - and are interpreted with respect for the Danish tradition. Anders Westfall Guitar Erik Olevik - Bass