Contemplation of the Blue Egyptian Goddess by John Voigt 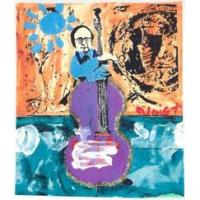 "Contemplation of the Blue Egyptian Goddess" uses overdubbing to explore natural harmonics on six string basses. The string length of the instrument enables the production of a full range of overtones.

And in a more metaphysical vein, the goddess referred to is, as John Anthony West writes, "a personification of universal principles, functions and processes. The Egyptians viewed the world as an entirely conscious creation, an aspect of divine consciousness." However goddess need not be the word used in the title. Guardian Angel, Higher Self, or (the Hebrew) Maggid all cover the same ground (of being).

This intends to upend new age trends by actually embedding substance found in the real properties of sound and the mystery attending it all. It is a very lush and wide ranging merge of bass sound properties and recording potential at that time. It is a regular thicket of partials and other lurkings in the overtone biome. The total bow focus and elongated tone voicings convey this stillness of a nocturne from which rises subtle flutterings of seabirds distantly heard. There's many a twitter here.