Come Thou Fount by The Britton Brothers 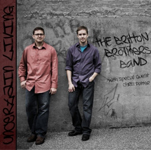 This track is an old hymn recorded on the Britton Brothers' debut album, Uncertain Living. The arrangement is by John Britton, the band's trumpeter, and the track features an open bass solo by Taylor Waugh at the beginning as well as a piano solo by Jeremy Siskind and a trumpet solo by John himself. Austin Walker holds down the drums and Ben Britton supports the arrangement on tenor sax. Uncertain Living was released April 9th, with a celebratory release show in NYC that featured the extraordinary saxophonist, Chris Potter, as a special guest. He also guested on the album on two of the tracks. Read the full review of the album by Bruce Lindsay here - http://www.allaboutjazz.com/php/article.php?id=36120 About the Britton Brothers Chris Potter said, "Ben and John Britton are two extremely talented young jazz musicians, with a clear knowledge of the past but an eye towards the future. Check them out!" An interesting note to musicians - On the band's webpage, www.thebrittonbrothers.com, you can find free play-alongs of some of the tracks from the album including the 9 time signature Extra Fuzz, and the composition Molo, which Bruce Lindsay called "the album's most beautiful tune." You can also find free transcriptions of Chris Potter's solos from the album made available in all the common transpositions. 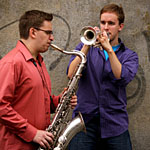 About The Britton Brothers