Colonnade Beneath the World by Mimika Orchestra 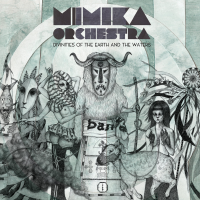 Album Title: Divinites of the Earth and the Waters
PDV records
Released: 2018

Big beast of a tune, language has its own place as an instrument, even if you don't understand. Upbeat drama.

The track Colonnade Beneath the World is the second track on the new album Divinities of the Earth and the Waters (released in May 2018, PDV records and recorded in 2016 and 2017). The tune is set in an enchanted psychedelic garden based on Slavic folk tales of Rusalka and Jarilo, Zleni Juraj, but also South Slavic experiences of the Venetian republic. The album further delves deeper into the idea of ceremony, finishing in a funeral ceremony (check the track Forgiveness Day). The tune is set in uneven Balkan polymetres. Solos by Seb Silas, soprano sax and Jamie Benzies, el.bass. Vocals: Maja Rivic.