City Nothing City by Devin Gray 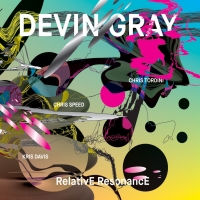 Drums and bass are route master channeling a path for the tributary of piano and sax. Intricate with a recognizable destination.

City Nothing City; In The Cut; Notester; Jungle Design (for Hannah Shaw); Transatlantic Transitions; Undo The Redo; Relative Resonance (for Tad Dameron); Search It Up.