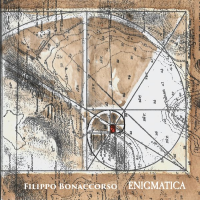 About the album: There are two fundamental aspects at play in a composition: the inspiration and the technical aspects of the composition itself. This applies both to the “written” component as well as to the component conceived “in real time” by the creative and spontaneous genius of the musicians, something essential to Jazz. In this project, the latter component was of supreme value and, in this sense, the fact that this album bears my name is purely a matter of “convention” rather than reality. What I want to highlight is the significance of the contributions of the musicians with whom I shared this project, how great their sensitivity was in reading and interpreting these works of mine, and how great my emotion and surprise was in listening to the results. These compositions were born during a very long span of my life, long before I conceived of this project and this album. “Enigmatica” is the characteristic of the human soul that is indefinite, often unsolved, not always clear; consequently, there exists a difficulty in human relationships where it often becomes necessary to resign oneself to the idea of not understanding, and of having doubts. The certainties acquired during one’s lifetime must sometimes be called into question, and it is a genuine challenge to resist the temptation to “resolve” them, even musically. I think that I naturally, involuntarily and perhaps even unknowingly translated all of this into the musical language of these works. As a result, one or more melodic lines are opposed to a harmonic line. While each line is dependent on the other, the result is a distribution of tensions according to a certain criterion, or result of an experimentation on the piano, without particular rules nor in stricty “tonal” areas. They are the result of the liberties that I have taken in compositional terms. About the track: Cinque Cilindri is the oldest piece, and perhaps the one I wrote most spontaneously, sitting at my mother’s piano, thinking about something dynamic, powerful, like a car with an extra cylinder. For this project I added a second melodic line harmonized with the original one and, prior to recording, the rhythmic key of the arrangement evolved into a “rumba”.