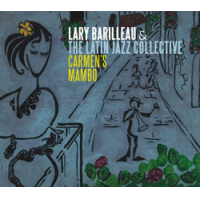 Carmen's (mucho) Mambo, takes you back to the 50s and 60s, if you were there the first time that is. For the rest of us, well shake it and see how it moves you. If you have a penchant for the Nuyorican Soul vibe be moved.

The Latin Jazz Collective is a new project conceived by Lary Barilleau, a Seattle based percussionist, composer and award winning educator. Carmen's Mambo features the original music of Grammy nominated musician Lary Barilleau, Grammy winning arranger and trombonist Doug Beavers and multi-instrumentalist Jay Thomas. The unique mixture of jazz melodies and harmonies along with Afro-Caribbean rhythms reflects the classic sound of Latin jazz. The CD was recorded over a 2 year span in San Francisco, New York and Seattle. All arrangements and orchestration by Doug Beavers.