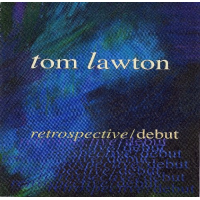 Pianist/composer Tom Lawton's 2 CD-set Retrospective/Debut features his tunes, written from 1975, through the '90s, up to 2003. Although the project prominently displays the luminary talents of saxophonist Ben Schachter and John Swana on trumpet, the selected track here, from 2003, is trio format: Tom Lawton, piano; Lee Smith, bass; Jim Miller, drums.