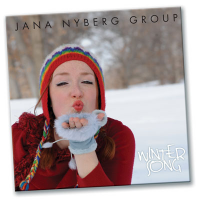 Musically fresh as a new snow footprint, crisp as a snowflake. Lose the Bing-a-likes this Christmas. Cool Jananas! Happy People.

This is the first track from my new album, Winter Song! I was on American Idol in Season 10 and "Made it to Hollywood." The whole experience was a little surreal, seeing lights on palm trees during the Holiday season, so I just had to write some music about it. My husband, Adam Meckler and I co-wrote this one.