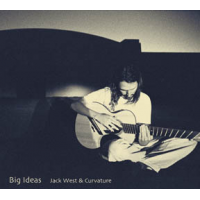 Big Ideas is the fourth release from 8-string guitar virtuoso Jack West and his ensemble, Curvature. Produced by Lee Townsend, who specializes in recordings of an interdisciplinary, cross-genre nature by contemporary composers and improvisers (Bill Frisell, Pat Metheny, Charlie Hunter), this recording is a perfect fit for both musician and producer. First class players include drummer Scott Amendola, marimba player Joel Davel, and cellist Mark Summer.

track of the day Big Ideas Ahead Behind Music Jack West