A Story and a Walk by Akihiro Yamamoto 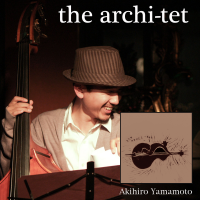 Nice straight-ahead tune to end the weekend right. Album is a few years old, but new to me, so I'm running the track now. Yamamoto is involved in a current project called Wrestle Jazz that makes jazz arrangements of Japanese wrestler theme songs, which may seem like a novelty, but is actually quite good. I'm hoping to feature a track from that album soon. In the meantime, enjoy some of the jazz goodness Yamamoto is capable of.

The Archi-tet is my first album with original compositions. "A Story and a walk" is the most straight-ahead swinging tune from them. Other tunes are more funky and modern. Personnel: Aki Yamamoto (composer/arranger and bass), Miki Hirose (trumpet), Mike Wilkens (tenor sax), Dave DeMotta (keyboards), and Yutaka Uchida (drums).