A Little Blue Circle by Will Goble 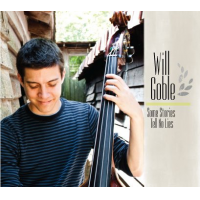 Featuring Marcus Printup, trumpet and Chad Eby, saxophones, Will's first offering as a bandleader was captured with out any edits, over dubs, or punch-ins, in order to tell an un-embellished musical story. "A Little Blue Circle" is the first of Will's originals featured on the album. Austin Johnson is on piano, Will on bass, and Dave Potter on drums.