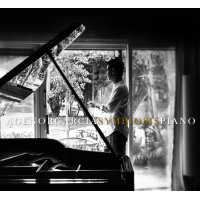 Delicate pianism that makes full use of the internal resonance of the instrument.

Age Garcia is releasing a 2014 album named "Symbiosis", produced by Glen Kolotkin (Barbra Streisand, Santana, Glenn Gould). The album deliver a nice piano performance and delightful compositions with a unique flavor. "I have been working with Age Garcia, on his latest album. Age is talented, creative and has a very refreshing approach regarding his music". Glen Kolotkin