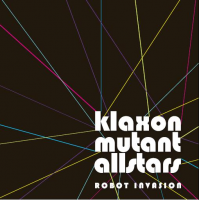 Jamie Moyer is about the baseball pitcher, who at the age of 49 had made it back to the major leagues. “I was so moved by the sheer audacity of his career, how he could still be in the league long after anyone thought he should be ... a career built from modest talents, but lengthened through sheer will and experience.” This song is especially notable for the highly inventive soloing of both keyboardist Colin Hogan and saxophonist Kasey Knudsen, where Knudsen can be heard reacting to her own solo reprocessed with live effects by Henry Hung. As a tribute to Moyer’s bafflingly slow fastball, the Klaxons find ways to manipulate tempo in abrupt fashion and finish in a flourish with Hung's solo ending the song.