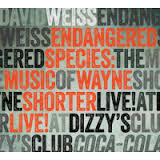 Get your thinking caps on. Some brain-blasting big band sounds shaped like Wayne Shorter.

The music of Wayne Shorter, arranged and led by David Weiss.

Weiss stated in his press release, “I consider Wayne to be one of the most important composers in the history of this music and arguably the greatest living composer we have today in jazz. I also thought a composer of such breadth and scope should have an ensemble devoted to re-examining, expounding and expanding his music.”