Wolf Out by The Bad Plus 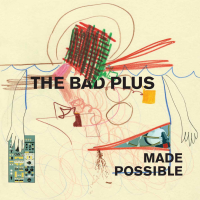 Album Title: Made Possible
By: The Bad Plus
Label: eOne Music
Released: 0

"Wolf Out" is a song streaked with heady minimalism. Made Possible marks a palpable departure for The Bad Plus on a few fronts. Layers of synth and electronic drum sounds can be heard prowling amid the trio's signature acoustic palette. Also, whereas the group's new material typically gets a thorough road test before being recorded, these songs were brought in with looser expectations and even more potent possibilities. And for the first time since 2005's Suspicious Activity?, the band chose to record far away from its Minnesota motherland, holing up instead at a remote studio in upstate New York.

About The Bad Plus