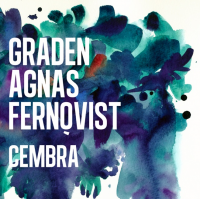 An intriguing track from a young trio that appears to enjoy throwing several influences into a mixing bowl and let it fly. On this track, the trio is always running right along, though they do frequently change their speed throughout.

Taken from the album Cembra by Swedish trio Graden/Agnas/Fernqvist. Influenced by a wide range of musical genres stretching from renaissance to contemporary classical music, New York jazz to soundtracks and through playful and creative interplay, the trio takes the audience for a mystical ride through time and space. Experience the village of Cembra in the Italian Dolomites and get acquainted with Ottmar, the party animal. Join the trio back to the 17th Century, the sibirian countryside and to the whereabouts of M r Gesualdo da Venosa. Also, lurking in the shadows, a large cat, the Maine Coon.