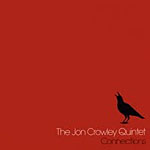 This is the first I've heard of Jon's music, and it's an introduction I'm thrilled to make. His sound on trumpet is ethereal, like a strong gust of wind that can be felt but not seen. Wonderful tune. Should appeal to fans of Brian Blade and Taylor Haskins. Jazz from the Brooklyn scene.