I Got A Treme Woman by Kermit Ruffins 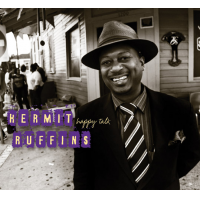 There's a point in the first season of HBO's "Trem" where Steve Zahn's character remarks "America needs it some Kermit." This fall, America will get it some Kermit Ruffins with the release of his latest album, Happy Talk on October 26 via Basin Street Records. Produced by GRAMMY Award Winner Tracey Freeman (Harry Connick, Jr., Jeremy Davenport), Happy Talk is Kermit's first collection of big band music.