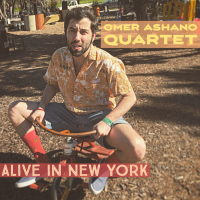 Pnima is the fourth track in Omer Ashano's debut EP "Alive In New York". The tune, composed by Ashano, is mainly influenced by African pop music derived from the styles of Congolese Rumba and Sungura which are heavy guitar-driven genres in popular West and East African music. Pnima in Hebrew means "inwards". The EP consists of four original pieces and two jazz standards arranged by Ashano, “Tenderly” and “All The Things You Are,” which features three other young and talented musicians: Juan Vidaurre on guitar, Solomon Gottfried on double bass and Roy Ben Yosef on drums. The album’s original tunes were composed during different periods of Ashano’s life, yet are unified by the same element of raw and intuitive emotional expression rather than attempting to depict a concept or idea. Being a folklore music enthusiast, he was always greatly influenced by the sense of simplicity and authenticity found in traditional music of different cultures and that essence is sought after in his playing and composition.