Maracatu do Manatim by Rebecca Hass 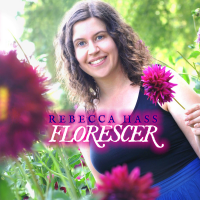 Originally conceived of as solo piano pieces, the songs on Florescer are augmented with percussion by Tim O’Keefe, an expert in many hand-drumming styles from around the world. Also featured are Jenny Klukken, marimba, on the playful maxixe/samba Brincalhão and Gingando, a choro with traditional form and a modern flavor; and Laura Harada, violin on the Brazilian choro serenata Anelante, that has traditional choro form, but also a heavy dose of Debussy. Even without the addition of percussion, the rhythms of the traditional percussion instruments of Brazil are infused throughout these creative arrangements and original compositions. With great variety from Maracatu do Manatim, an un-traditional maracatu about a grooving manatee, to Borboleta Azul, an effervescent pandeiro-driven tune that switches between baião and samba styles, these creative compositions are fun to listen to. The arrangements are equally interesting - the classic sambas such Alvorada, Folhas Secas and Samba de Orly feature fascinating elements such as a big band shout chorus-esque section, lush, rubato intro, partido alto rhythms, and intricate basslines, and the classic choro Tico-Tico No Fubá is given a surprise treatment with samba tamborim parts and baião basslines in the piano part.