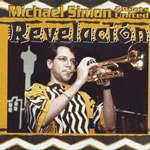 Revelacion is the debut CD of Michael Simon's Roots United, a formation of international, experienced and mature musicians. On this album Michael Simon proves not only to be an outstanding trumpet player but also a very talented and modern composer. His compositions are new, fresh and sparkling. The contribution of Michael's brothers Marlon and Edward, both known in the jazz scene, adds to Revelacin the flavors of their youth, their colorful background and mutual love for jazz.