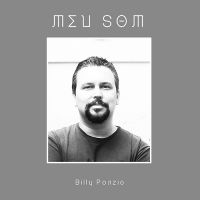 Billy Ponzio (drums,synths,programming) "Meu Som" means "My Sound". I am a traditional jazz drummer in Brazil, and this authoral album expresses my different musical view, mixing swing-drumming, a funky-rock beat and progressive melodies. Released in June 6, 2017. Recorded, mixed and mastered by Paulo Penov.