The End Of A Love Affair by Gianfranco Menzella 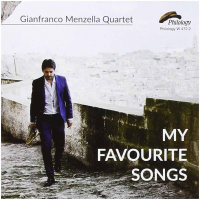 "The End Of A Love Affair" was written by Edward Redding and first released by Marea return Whiting in 1951. In this version it is played by the Gianfranco Menzella Quartet, in an album devoted to the leading musician's favourite standards, reinterpreted in an elegant and personal style. The line up is Gianfranco Menzella: sax; Bruno Montrone: piano; Nicola Muresu: bass; Giovanni Scasciamacchia: drums.