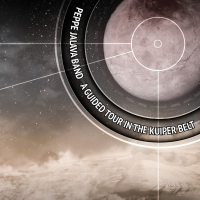 Album Title: A Guided Tour in the Kuiper Belt
Label: Self Produced
Released: 0

Chair wheel squeaks and echoes of wind tunnel as an intro might ward off baby boomers and naughties...stick with it...fullsome horns and a big ol' drum kit make for a meaty sound with a solid groove.