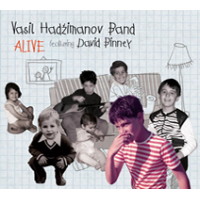 In keeping with the label's time-honored tradition of shining a spotlight on newly-discovered artists whose immense musical talents challenge convention and defy categorization, MoonJune Records is pleased to offer the musical stylings of Serbian keyboardist, pianist and composer. Although hardly a household name outside Europe, Vasil has performed with a number of elite, renowned musicians (David Gilmore, Antonio Sanchez, Matt Garrison, David Binney, Nigel Kennedy and rock stars of the former Yugoslavia, Dado Topic and Vlatko Stefanovski, and his parents, the famous Macedonian pop and folk singer Zafir Hadzimanov and celebrated Croatian singer Senka Veletanlic). Vasil is a graduate of the prestigious Berklee College of Music, in Boston.