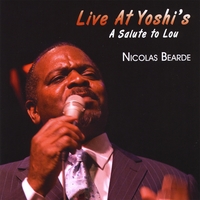 Album Title: Live at Yoshi's - A Salute to Lou
By: Nicolas Bearde
Label: Self Produced
Released: 0

Lou Rawls should be taught in school. Nicolas Bearde can be your teach. Gourmet cookin' band. #lungs #getreligion #begood #singsoulserenadetoo